Last weekend I had the chance to coach at the Django Girls workshop in Zurich. More than 40 girls came into contact with the world of programming for the first time this weekend. It was impressive what the girls learned in such a short time.

In order to keep the entry hurdles as low as possible, the whole event was free of charge for the participants and supported by volunteers and sponsors. Really cool!

During the two days, the participants accepted the challenges to dive into the depths of programming in teams of 3 + one coach each. The command line was part of it, as well as Git, HTML/CSS, Python and of course the web framework Django, which we at Adfinis SyGroup AG have already used successfully in many projects.

The workshop was not only challenging for the participants, but also for the coaches, who were confronted with very good questions. Sometimes it is more difficult than you think to explain something you know… 🙂

The event was able to debilitate many programmer clichés and make programming more appealing for women, which is a great thing!

If you missed last weekend, check out the Tutorial which served as the basis for the workshop.
Or even better, have a look at DjangoGirls Events, where there might be a DjangoGirl event near you soon. 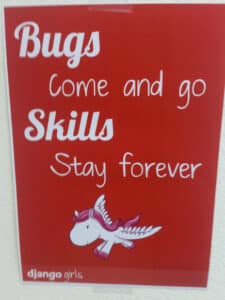