Forms on websites are so ubiquitous and so much taken for granted that they are rarely given much thought. Even so, every Internet user would probably find it easy to recall a form that does not work as well as it should. Variations seem to be endless and in particular regarding form validations there are still a lot of flawed implementations out there, even in 2017.

What makes a good form?

Most of the aspects which need to be taken into account for forms and their validation are already clearly demonstrated in a simple registration form: 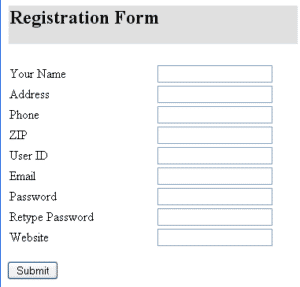 A good metric for the quality of a form is the average time needed by a user for its completion. A search for “best practices” for form validation brings up a range of good articles, which compare different versions.

Instead of jumping directly to specific recommendations for the creation of good forms, it is worthwhile taking a look at a few basic rules for the design of user interfaces first. Some entries from Aral Balkan’s “User Interface Design Principles”can be applied directly to forms and their validation:

From the basics, together with the results of the various studies, we can define some requirements for a good form:

Now it is time to apply what you learned in the frontend framework of choice. At Adfinis SyGroup, this is currently Ember.js.

As already familiar from the world of JavaScript, there are many different solutions for each problem. Ember Observer lists 32 add-ons in the form category, Google finds 222,000 results for ember form validation. Some results, however, deserve to be highlighted:

Unfortunately however, ember-form-for does not offer an “out-of-the-box” support for hiding validation errors until the user has interacted with the respective field (see issue #122).

This situation led to the creation of the new add-on ember-validated-form in our last Ember project, which provides a similar API as ember-form-for and relies on ember-changeset and ember-changeset-validations for the validations. We have the following objectives with the add-on:

Here’s an example for a typical template using ember-validated-form:

Ember-changeset-validations is used for the validation rules:

Together with Bootstrap, the result then looks approximately like this:

…and you can also try it yourself.

Form validation is not a simple subject and, like always, there is no “one size fits all” solution.
But with ember-validated-form we hope we can contribute to reducing the number of frustrating forms that can be found on the web. We appreciate any kind of feedback on Github!